The U.S. Jewish community experienced near-historic levels of anti-Semitism in 2018, including a doubling of anti-Semitic assaults and the single deadliest attack in U.S. history, according to new data from ADL (the Anti-Defamation League) issued today. ADL’s annual Audit of Anti-Semitic incidents recorded a total of 1,879 attacks against Jews and Jewish institutions across the country in 2018, the third-highest year on record since ADL started tracking such data in the 1970s.

In a year marked by the white supremacist shooting spree at a Pittsburgh synagogue, which claimed 11 lives, and punctuated by a dramatic surge in white supremacist propaganda activity nationwide, ADL’s Audit identified 59 people who were victims of anti-Semitic assaults in 2018, up from 21 in 2017. While the overall number of incidents represents a 5 percent decline from 1,986 incidents reported in 2017, the number of incidents last year remained at near-historic levels – 48 percent higher than the total for 2016 and 99 percent higher than in 2015.

“We’ve worked hard to push back against anti-Semitism, and succeeded in improving hate crime laws, and yet we continue to experience an alarmingly high number of anti-Semitic acts,” said Jonathan Greenblatt, ADL CEO and National Director. “Any decline in anti-Semitic incidents is welcome, and we are heartened by what, we hope, is the beginning of a downward trend in the U.S. But we must remain vigilant in working to counter the threat of violent anti-Semitism and denounce it in all forms, wherever the source.”

ADL’s annual tally of incidents nationwide found that anti-Semitic assaults, harassment and vandalism are still pervasive and at near-historic levels. In addition to the October mass shooting at the Tree of Life synagogue in Pittsburgh, 2018 saw high levels of white supremacist activity, including propaganda on college campuses and in communities, and hateful robocalls aimed at Jewish voters.

ADL’s Audit classifies all incidents into three categories: Assault, Harassment and Vandalism. Of the total incidents reported in 2018:

While most anti-Semitic incidents are not directly perpetrated by extremists, there are interesting connections between the trends. In 2018, 249 acts of anti-Semitism (13 percent of the total incidents) were attributable to known extremist groups or individuals inspired by extremist ideology, making it the highest level of anti-Semitic incidents with known connections to extremists or extremist groups since 2004. Of those, 139 incidents were part of fliering campaigns by white supremacist groups. Another 103 were anti-Semitic robocalls allegedly perpetrated by Patrick Little, an unabashed white supremacist who ran an unsuccessful campaign for U.S. Senate in California.

The Audit also noted spikes at several points during the year. The final three months of the year were unusually active, with 255 incidents in October, 300 in November and 194 in December. The high number in October included 45 propaganda distributions by white supremacists. The incidents in November and December immediately followed the Pittsburgh massacre, which likely drew more attention to anti-Semitic activities. Incidents first spiked in May, when 209 anti-Semitic acts were reported, including 80 anti-Semitic robocalls sent by white supremacists, which targeted Jewish individuals and institutions with harassing messages.

Incidents took place in nearly every state across the country but, consistent with prior reports, the states with the highest number of incidents tend to be those with the largest Jewish populations. These include California (341); New York (340); New Jersey (200) and Massachusetts (144).  Combined, these states accounted for more than half of the total incidents in the U.S.

Anti-Semitic incidents took place in a wide variety of locations, including places of business, private homes, public areas such as parks and streets, Jewish institutions and schools:

ADL’s Center on Extremism has gathered the complete 2018 data, as well as data from previous years on ADL’s H.E.A.T. Map, an interactive online tool that allows users to geographically chart anti-Semitic incidents and events nationally and regionally.

The Audit offers a snapshot of one of the ways American Jews encounter anti-Semitism, but a full understanding of anti-Semitism in the U.S. requires other forms of analysis as well, including but not limited to, public opinion polling, assessments of online anti-Semitism, and examinations of extremist activity, all of which ADL offers in other reports, such as ADL Global 100, Quantifying Hate: A Year of Anti-Semitism on Twitter, Online Hate and Harassment: The American Experience, Murder and Extremism in the United States in 2018, and White Supremacists Step Up Off-Campus Propaganda Efforts in 2018.

HOW ADL IS RESPONDING

ADL has a comprehensive approach to addressing anti-Semitic incidents and behavior, including educating youth to prevent these incidents and working with law enforcement to apprehend the perpetrators. ADL partners with law enforcement to raise awareness of extremist threats and trains law enforcement professionals to recognize and disrupt potential threats. ADL likewise provides education and training every day to students, reaching young people at a time when they are most vulnerable to bullying and social pressures.  ADL’s No Place for Hate and Words to Action programs teach understanding and promote inclusivity in schools and on campuses, respectively.

ADL has been a longstanding partner in the effort to ensure the safety of Jewish community organizations and recently announced that former Homeland Security secretaries Michael Chertoff and Jeh Johnson will co-chair a new Community Safety and Security Task Force convened by ADL and the Secure Community Network (SCN), the homeland security and safety initiative of The Jewish Federations of North America and the Conference of President of Major American Jewish Organizations. The task force will work to enhance the safety, security and resiliency of religious communities.

In response to the historic rise in anti-Semitic incidents over the past three years, ADL has made the following policy recommendations:

“It is incumbent upon our leaders to continue fighting anti-Semitism at every opportunity,” said George Selim, ADL Senior Vice President of Programs and a former DHS official. “We will continue to advocate for legislative and other remedies to ensure that there is no place for anti-Semitism in our society.”

The ADL Audit includes both criminal and non-criminal acts of harassment and intimidation, including distribution of hate propaganda, threats and slurs. Compiled using information provided by victims, law enforcement and community leaders, and evaluated by ADL’s professional staff, the Audit provides a regular snapshot of one specific aspect of a nationwide problem while identifying possible trends or changes in the types of activity reported. This information assists ADL in developing and enhancing its programs to counter and prevent the spread of anti-Semitism and other forms of bigotry. 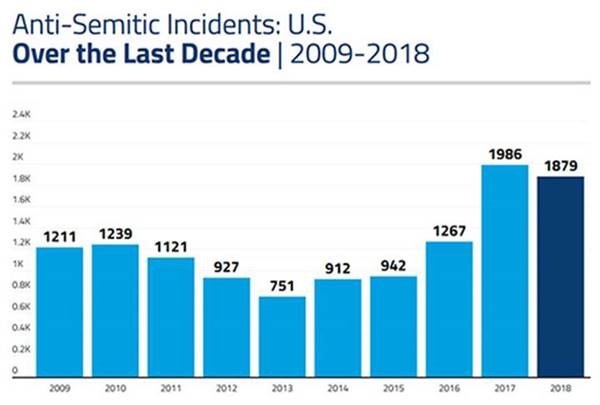