The Anti-Defamation League awarded the first Noah Klieger Anti-Defamation League Medal to perpetuate the memory of the Holocaust to Israel’s former Chief Rabbi Yisrael Meir Lau, and to social entrepreneur and activist Adi Altschuler at an event held on Tuesday evening (January 29th 2019) in cooperation with the French Embassy in Israel. The event was held at the residence of the French Ambassador Hélène Le Gal.

The medal is being awarded for the first time in honor of the celebrated Yediot Ahronot journalist Noah Klieger, a native and citizen of France, a survivor of the Auschwitz concentration camp who smuggled children and young people out of France to Switzerland, and was a Chevalier of France’s Légion d’honneur. Klieger, who died recently at the age of 92, dedicated his life to preserving and instilling the memory of the Holocaust and became a symbol all over the world. His personal story is one of loss and renewal, courage and hope. In addition, Klieger played an important role in raising awareness of modern anti-Semitism.

The ADL’s CEO National Director said during the event: “The statistics in surveys by the ADL and CNN about the lack of knowledge of the Holocaust around the world are appalling. High percentages of individuals have either never heard of the Holocaust or have little knowledge of it. The rise in anti-Semitism around the world demonstrates how little we have learned from the past. We need to reinvigorate the understanding of the Shoah and how hate speech, in general, undermines the ability to maintain respect for those who are different.”

France’s ambassador to Israel, Hélène Le Gal, said: “Our duty to remember requires us to be vigilant and determined. We must relentlessly fight not only Holocaust denial and relativism, but also anti-Semitism. France is the home of more than five hundred thousand Jews, the largest Jewish community in Europe. Protection of the Jewish community is the French government’s top priority: not only physical protection, but also constitutional and legal protection, and above all – education. This year, the top priority is to combat hate speech on the Internet and in schools, especially with the new online monitoring and oversight tools provided by Internet service providers and digital platforms. The battle is endless and it continues! No anti-Semitic attack will go unpunished.”

Keren Knoll, the granddaughter of Mireille Knoll, who was murdered in a brutal anti-Semitic hate crime in Paris in her home this past March, also participated in the event. Knoll said: “Leaving France and moving to Israel prepared me for many things, but nothing prepared me for the murder of my grandmother in Paris. My grandmother was a Holocaust survivor and was still murdered because she was Jewish. I refuse to raise my children to the possibility that terrible things can happen to them just because they were born Jewish. I refuse to live in a world in which I have to be afraid because I am Jewish.”

Former Chief Rabbi of Israel, Rabbi Israel Meir Lau, recipient of the Medal, spoke at the ceremony: “Not only those who were in the camps are Holocaust survivors, but all of us, all the Jews in the world, are Holocaust survivors. If the Nazis had finished the genocide they had planned for the Jews – all Jews everywhere would have been in danger. We must continue to fight anti-Semitism, which is rearing its head with ever greater force. ”

Adi Altshuler, the founder of Memories@Home, who was awarded the medal together with Rabbi Lau, said: “I am moved to receive the Anti-Defamation League medal to commemorate the Holocaust and I am honored to be recognized in memory of the late Noah Klieger, a man whose story, personality and life’s work inspired me. I am embarrassed and proud at the extraordinary honor of sharing the medal with the one and only Rabbi Israel Meir Lau. The medal is a tribute to all those who are active in Memories@Home and the hosts who open their living room to a meaningful, different and connecting evening.’” 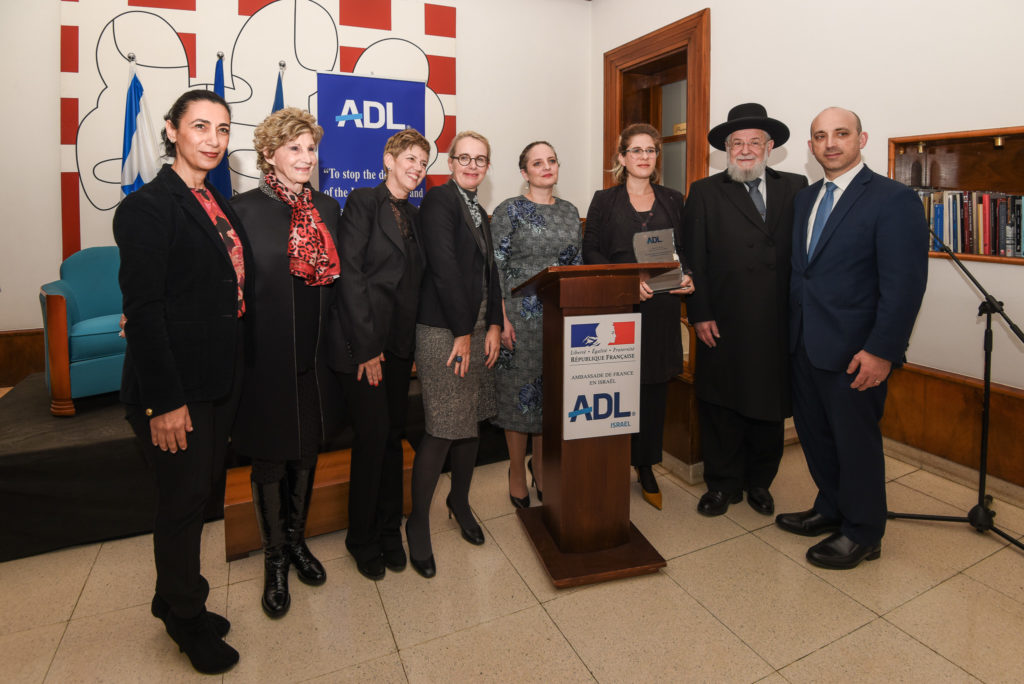